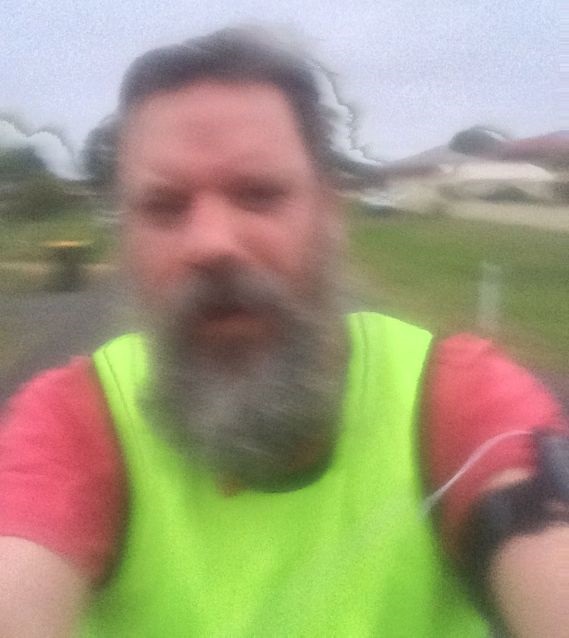 Something borrowed, something blue..

Back in the saddle, cycling (running) into the bin today after a month in the UK, the epic flight back and two days of jetlag hell. Back on the old circuit round Ballan, but with the snazzy new trainers bought in Glasgow, a soundtrack 'borrowed' from the internet, and a rather blue state of mind. It was a long haul flight that kick started my stroke two years ago, and despite the Claxene injection I gave myself before the flight, my daily Aspirin and some pressure socks, the fear was still there. I think I picked up a bit of sinus infection on the plane, which makes me hyper aware of some nerve damage in my face, so I spent yesterday in my own personal storm microclimate, fearing I was having another stroke. The photo I took this morning looks like I have an electric current flowing through me, which is pretty much how I felt. I wasn't having a stroke, but the fear was real. A good run this morning helped blow the storm away, but it's a pertinent reminder about why I'm doing this.

I've got my one year tests coming up. I'd like to run away and hide, but I can't. But I can run. This blog has been about Cancer, but you know, it was a stroke that started this all off, and I will never ever forget the fear and anxiety of an unexplained stroke. I'm raising money for The Stroke Foundation by attempting the Melbourne Half Marathon this year. I'll add another page with an update soon, but in the meantime, I'm going to keep running

You can support my Half Marathon attempt here

and I will always love you x

Brilliantly written blog Bob. You are an inspiration and keep fighting and making people laugh the way you always have x

Hey there ya auld roaster. Sorry to hear about what you have been through and what you are currently going through, but glad to read that you are facing head on and with great humour.

Thanks Sandy. Hope you're surviving your chemo, in every sense! Fistbumps.