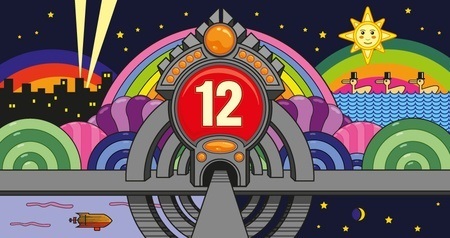 Actual visualisation of the moment just before you enter a 12 step program.

Are we sitting comfortably? Good. Then I'll begin. My name is Bob. In the last 15 months, I've had a stroke, a heart operation, internal bleeding and now stage three bowel cancer. It's all linked, partly because it's all happened to me and you know, I'm so special, but mainly because one thing is a consequence of another. If you'd like to know just how we got here, have a squidge at this blog published by the Stroke Foundation.

In that blog, I said I was expecting two months of Chemo. Uh-uh. How wrong was I for doing a bit of research? Nope, over the next six months, I've got twelve cycles of fortnightly intravenous chemotherapy to endure. It's telling that the rest of the world has now worked out that only two months (or 4 cycles) of chemo is really needed, but here in Victoria, Australia, we're still very much wedded to the number twelve because twelve is such a significant number to all of us. You, my foreign /out of state reader will, of course, be familiar with the twelve days of Christmas, A dozen red roses, the twelve disciples, twelve months in the Gregorian calendar, twelve step programs and the very best Sesame Street number song being number twelve.

The twelve stages of coagulation. Hmmm.

All well and good. But here in Victoria, we have an attachment to the number twelve beyond your puny comprehension. It takes twelve hours to drive from one side of Victoria to the other. And we drive it all the time, sometimes just to have morning tea with a friend. We openly mock your religious sensibilities with our crumbling Twelve Apostles on The Great Ocean Road, and there are twelve Victorian Football Teams (if you count The Sydney Swans as really being South Melbourne and Brisbane as really being Fitzroy), a code which replaced Christianity as our official religion many many years ago.

So twelve it is, as it must be. Twelve cycles, twelve blogs on the effects of accumulative and debilitating poisoning. Apart from this entry, which makes it thirteen in total. Hmmm.

Oh fuck that. Thirteen? Nah, maybe not. I'm not superstitious in any way, but you know, this whole debacle isn't doing much for my anxiety overall as it is. I'm happy to submit fully and completely to any and all OCD occurrences that raise their head over the next few months. Superstition might be irrational, but who cares? I accept that the world will likely not end if I don't press that lightswitch one more time, or change this blog to at least fourteen entries, but why the hell would I risk it right now? I'll tack on another entry at the end if I can still feel my fingertips. Which apparently I might not.

I've yet to get the date of the first dose of chemo, but if you are at all interested in following my descent into the twelves cycles of hell, please feel free to check in with me. In the meantime, I'll just keep peddling on.

hi bob. it occurs to me that expecting twelve but getting thirteen is a bit like doctor who.

No Sir! All Thirteen! (still gives me goosebumps).

Hi Bob, you certainly have been through the mill. My battle with rectal cancer has only just begun. The treatment plan is 5 weeks of oral chemo therapy and radiotherapy. followed by surgery.

Best of luck on your journey. Please let us know how you're traveling. I'll be thinking of you as you go.

Brilliantly written blog Bob. You are an inspiration and keep fighting and making people laugh the way you always have x

Hey there ya auld roaster. Sorry to hear about what you have been through and what you are currently going through, but glad to read that you are facing head on and with great humour.

Thanks Sandy. Hope you're surviving your chemo, in every sense! Fistbumps.